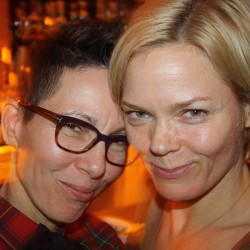 Parallel Play is a comic revue written and performed by Elvira Kurt and Megan Fahlenbock. They play a variety of roles in a series of satirical sketches based on their experiences as women–wives, lovers, working mothers, daughters and friends–in the world today. All ages but mature content, parental discretion advised. (Toronto Fringe Program, 2014).