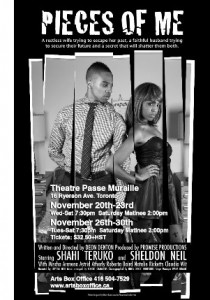 A restless wife trying to return to her past, a faithful husband trying to secure their future and a secret that will shatter them both. This is the Tale of Pieces of Me a musical drama about the Power of Purpose and the Dangers of Restlessness. The story of Hosea and Gomer is used as a backdrop for a modern tale of sex, lies and betrayal. It depicts the portrait of a beautiful couple celebrating the perfect life and marriage. But up close that portrait is flawed with deception as we see the wife, Pamela, being overcome with restlessness and boredom and secretly yearns for her former life. Her husband, Parker, is unaware of his wifes discontent, and works hard to secure their future, until he is confronted with a secret from her past that threatens to shatter their world and destroy everything he believes to be right.  (artsboxoffice.ca)