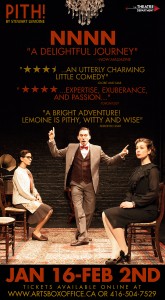 Pith! is Stewart Lemoine’s award winning, innovative, hilarious, and ultimately moving tribute to the power of the imagination. In Providence, Rhode Island in 1931 an itinerant sailor leads a grieving society widow and her stoic housekeeper on an exhilarating and treacherous journey into he heart of the South American jungle…without ever taking them out of the living room.  (thetheatredepartment.com)