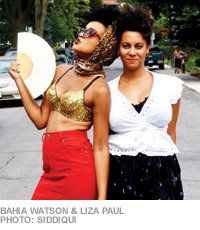 Paul Watson Productions and The Young Centre for the Performing Arts

Presented as part of Winter at the Young

pomme is french for apple is a fresh, funny, and irreverent look at womanhood in all its glory: its perils, its pleasures and all kinds of madness in between. Comprised of a fast-paced series of vignettes, the show is a vaudevillian and distinctly West Indian exploration of the absurdity of women’s lives in settings as diverse as the islands, downtown Toronto and southeast London (youngcentre.ca)