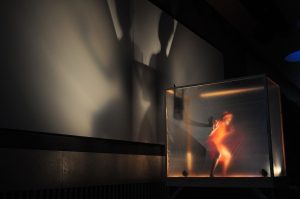 The Power Plant Contemporary Art Gallery and TO Live

Okwui Okpokwasili is a performer, choreographer, and writer creating multidisciplinary performance pieces that centre the African and African American woman in divining vocabularies to explore the unruly interiority of the human condition. As the child of immigrants from Nigeria, born and raised in the Bronx, the reconstitution of memory and the slippery terrain of identity as a particular condition of the African diaspora  features prominently in much of Okpokwasili’s work. Her productions are highly experimental in form, bringing together elements of dance, theater, and the visual arts (with spare and distinctive sets designed by her husband and collaborator, Peter Born).

Poor People’s TV Room SOLO is a performance installation that considers duration and urgent complaint as critical aspects of an embodied protest practice. Text from the report commissioned by the British Colonial Government in 1930 to investigate the uprising of women in Nigeria, serves as the primary source material. This uprising, known as the Woman’s War of 1929 was also referred to as the Woman’s Egwu. Egwu, in Igbo, one of the Indigenous languages of Nigeria, means dance. The linguistic tie between performance and protest is an especially compelling and fruitful exploration in this work. (progressfestival.org)