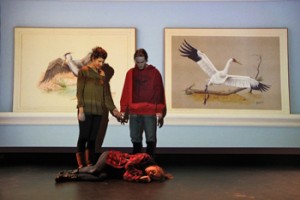 Inspired by interviews conducted with residents of Neighbourly Lane in Richmond Hill, On., Post Eden is a multimedia fantasia in which a teenage girl exhumes her dead family dog to break a curse that has befallen them. Playing out over the course of a single day, it is a quiet and surreal story about our search for redemption and meaning in our everyday lives. Actors onstage interact with their filmic selves in disarming ways and the lines between documentary and fantasy, the quotidian and the magical, blur. (suburbanbeast.ca)