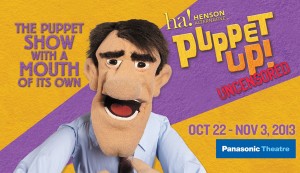 After just the first few moments of watching… or rather.. interacting with the puppeteers of Puppet Up! – Uncensored, you’ll realize this is no ordinary puppet show. For starters, you can see it all happening. And we mean all. The magic that’s usually a secret shared only among expert puppeteers is unveiled on stage as this world-class, hilarious gang of professionals does their thing right before your eyes. Of course, purists in the audience can still watch the “traditional” puppet show on a large screen in between blurting out suggestions that become sketches on the fly! Simply put, see Puppet Up!, and you’ll get two-shows-in-one of improvised Henson puppetry, for adults only. (puppetup.com)