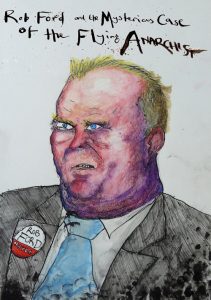 Rob Ford and the Mysterious Case of the Flying Anarchist (2011)

The next time the G20 comes to town, Rob Ford is ready, Stephen Harper is ready, Police Chief Bill Blair is ready. So when a bomb goes off downtown, scores of protesters are rounded up right away. Everything is going smoothly until an anarchist organizer falls to his death from a window during interrogation. Police reports say it’s an accident. And that it’s a suicide. A lone maniac tries to discover the truth. What was the Mayor doing at the police station that night? (Show Press Release)