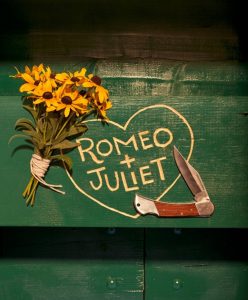 Two young lovers marry behind their feuding families’ backs. In our 21st century production, single mothers laid the law of the land, while Romeo’s gender-fluidity was embraced by all of Verona. Unfortunately, no amount of tolerance can stop a century-long feud and save these star-crossed lovers from their tragic fate. (shakespeareintheruff.com)