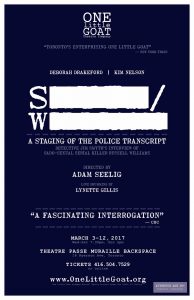 On February 7, 2010, Detective Sergeant Jim Smyth of the Ontario Provincial Police interviewed Colonel Russell Williams about his possible connection to multiple crimes, including two rape-murders, that had occurred in the Ottawa and Belleville areas close to the home and lakeside cottage Williams shared with his wife and their cat. Williams at the time commanded the Canadian Forces Base at Trenton, the busiest air base in the country (located near Belleville, about 175km east of Toronto). This was the first, and would end up being the only, time he was called in for questioning. After more than four and a half hours of careful interrogation punctuated by long waits and silences, Williams confessed, going on to describe his crimes in matter-of-fact detail. The entire session of nearly seven and a half hours was videoed and transcribed by the O.P.P. and, after some heavy redactions, posted and published. “It was an excellent piece of police work on behalf of Jim Smyth who conducted this interview — one of the best interviews I’ve ever seen” is how Smyth’s superior described it. “It’s a smart man, outsmarted by a smarter man.” (onelittlegoat.org)