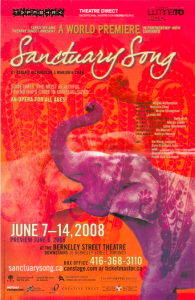 This opera took audiences on a journey through the life of an old circus elephant, from her early years in Southeast Asia to her years of captivity in a circus, and finally to her eventual happy ending at an elephant sanctuary.

Poached by hunters, Sydney is sold to an American circus to be trained as a dancing elephant. Her faithful zookeeper, James, hears Sydney’s memories of her happy life of freedom and her cherished friend Penny. James vows to set Sydney free before she dies.

Soaring voices, vivid movement, and heartfelt performances — along with a live ensemble and beautiful costumes, set, and lighting — made Sanctuary Song unforgettable. (theatredirect.ca)