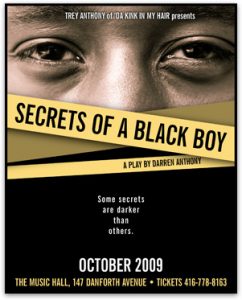 “You really want to know what a Black man is thinking? Well the secret is out!” The male response to ‘da Kink in my Hair gives a thought-provoking look into the lives of black men. Secrets Of a Black Boy is a theatrical productions that takes place in modern day Toronto, Ontario. It is a current and very urgent story outlining the displacement of families in Regent Park. Four friends gather around a community centre about to be torn down, as they feel the need to say their goodbye one last time to the place they all called home for so long. While they are gathering they reminisce about what the community center means to them and the play becomes a much more urgent commentary about both the disintegration of Regent Park and the lives of the young men most affected by it.

Secrets Of a Black Boy is a gritty, uncensored look at the lives of black men. No subject is taboo from interracial dating, commitment phobia, gun violence, sexuality, and love. Every stereotype of black men will be critically examined and explored, subsequently, giving audiences a fresh, new and authentic experience. (treyanthonystudios.com)