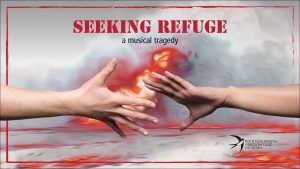 Two sisters struggle to survive amid civil war, left homeless, their family killed. Their only possession of value is their mother’s jewellery – enough to barter for freedom – for one. Can a sister’s sacrifice open the door to a new life? Filled with captivating melodies and relentless rhythms, this powerful musical will leave you inspired by the resilience of the human spirit and devotion of the sisters as they seek to overcome insurmountable obstacles and attempt to re-unite in the safety of a new land. (Toronto Fringe Festival program)