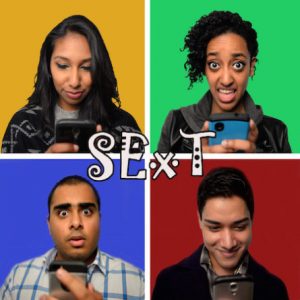 Moo with Me Productions

Written by the ensemble.

You’ve seen the protests. Adults have a lot to say about the new sex ed curriculum, but now it’s time to let teens give us The Talk.

SExT: Sex Education by Theatre empowers youth from a community where sexuality is a cultural taboo to take centre stage. Beginning as research by doctoral candidate Shira Taylor, SExT has evolved into an entertaining and powerful compilation of skits, songs, poems, raps and dances. SExT is a collaboration between local professional theatre artists and a diverse group of youth from Flemingdon and Thorncliffe Park – two immigration destinations in Toronto and the recent hub of protests opposing sex education reform in the wake of the first curriculum update since 1998. Come hear what these youth have to say about growing up in the age of cyber bullying, sexting and rape culture. SExT promises to leave audiences reconsidering preconceptions of young people, diversity, stereotypes, and sexuality. Who knows, you may learn a few things! #SExTEd (summerworks.ca)