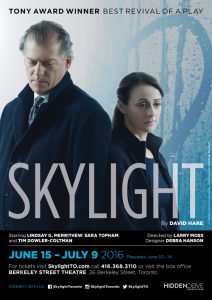 An unexpected knock at the door on a deep winter night in Northwest London brings the past rushing back into Kyra’s apartment. At the door is Tom, a restless, self-made restaurateur and hotel tycoon, and Kyra’s former lover. After three years apart, Tom has come to reclaim his former mistress following the death of his wife. Though the current of their desire still runs strong, time has carved them into very different people. (canadianstage.com)