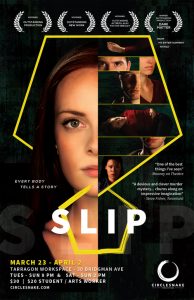 Slip follows Detective Lynne  Barrett as she tries to piece together a mysterious death: a woman is found dead on the floor of an abandoned apartment with debris strewn everywhere, and a symbol carved into her arm.  Her attempts to uncover the truth are disrupted by the overwhelming complexity of the case, and Lynne must untangle a mystery that escapes the simplicity of a single story. A play about crime, memory, and storytelling. (circlesnake.com)