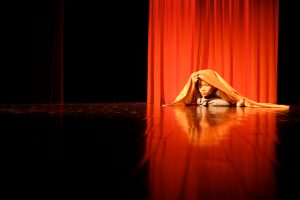 Beginning with the story of her family’s escape from Cambodia, playwright and performer Chantria Tram chronicles her struggle to balance the traditional values of her Khmer parents with her own emerging beliefs. Someone Between is a humorous, emotional, and vulnerable contemplation of cultural adaptation, migration, and the place between who we are, who we were, and who we are becoming. (summerworks.ca)