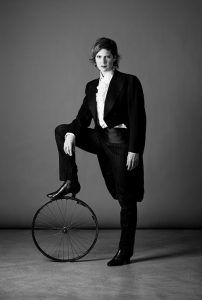 Through a series of songs played live on a vintage bicycle, SPIN recounts a theatrical cycle of stories about bikes, women and advertising. Inspired by the incredible true tale of Annie Londonderry, the first woman to ride around the world on a bicycle in 1894, SPIN blends theatre, music and technology in a unique tribute to the bicycle as muse, musical instrument and instrument of social change. (buddiesinbadtimes.com)