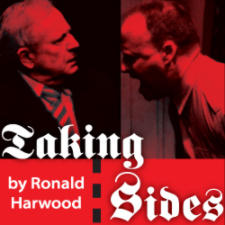 The action takes place in the American Zone of occupied Berlin, in 1946… where the De-Nazification Tribunal has convened to take over the questioning of Wilhelm Furtwängler, one of the outstanding conductors of his time. Furtwängler was at the height of his career in 1933, just as Hitler became Chancellor of Germany. As the terrors of Nazism spread, many of Furtwängler’s colleagues fled the country but Furtwängler chose to stay. Did he stay to do as much good as possible in the face of evil, or did he stay to serve Hitler? The Tribunal’s evidence has been prepared firstly by the British, and then taken over by two groups of Americans: one in Wiesbaden which assisted in Furtwängler’s defence, the other in Berlin which helped build the case against him. (stagecentreproductions.com)