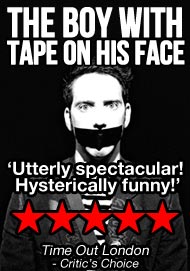 Presented as part of a double bill with Julie Madly Deeply

The Boy with Tape on His Face, an unusual show which is exactly what the title states. The Boy is Sam Wills, an award-winning comedian from New Zealand. He has a wide piece of duct tape across his mouth. In ingeniously expressive silent nods, looks and gestures he is able to communicate what words could never say. From an ordinary cardboard box or ordinary objects, the Boy creates the extraordinary, conjuring up moods, stories, actions and universal truths. It is a performance that cannot really be described; it has to be experienced. (mirvish.com)