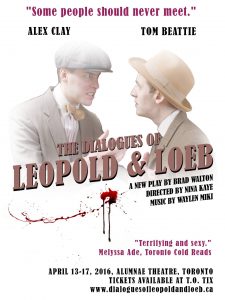 Some people should never meet. This was the case with Nathan Leopold and Richard Loeb. As individuals they were courteous and cultured teenage prodigies. As a couple they were cold-blooded killers. In 1924 they shocked crime-jaded Chicago with an act as ruthless in its brutality as it was bewildering in its lack of motive. ​They were fused together in an intense and volatile relationship. Shared guilt and mutual need reinforced the bond. Even their own attempts to dissolve their friendship ended in failure as they found themselves joined on a trajectory of murder and self-destruction. (dialoguesofleopoldandloeb.ca)