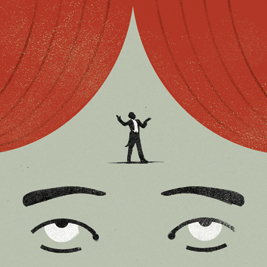 The services of self-titled “Dynamatologist” JPW King, an Englishman living in Dublin, are retained by a mysterious Irish building contractor who wants to sing like the famed operatic tenor Beniamino Gigli.

King, anything but a voice teacher, and the mysterious and dangerous Irishman begin a process of exploration unearthing the power of the mind in their mutual search for salvation. (soulpepper.ca)