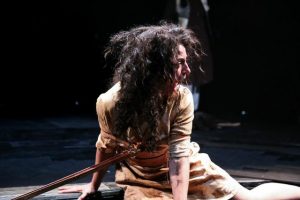 Deep in the North, a philosopher, exiled for promoting his atheist work amidst a bloody religious war, knows his theories can ignite a revolution. He wants nothing more than to return to the City, join the young Prince on the verge of inheriting political power, and usher in a new age of Reason. There’s only one thing holding him back; his personal life has collapsed into chaos. In a desperate attempt to cure his wife’s inexplicable, animalistic behaviour he hires a dog trainer. What begins as an experiment in canine obedience erupts into a power struggle between the sexes–unleashing violent reckonings with the animal within. The Philosopher’s Wife, is a modern gothic Rated Mature for opium eating, female sexuality, phantoms coming for your soul, dark humour, the birth of the enlightenment project, religious persecution, and subverting notions of education, sex, power, and submission.  (empiretrilogy.com)