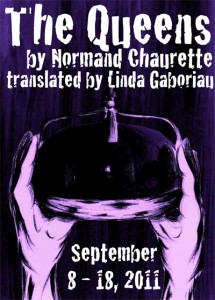 Drawing inspiration from the characters of Shakespeare’s Richard III, The Queens tells the story of six ruthless and passionate royal women, all vying for a chance at power. Set just prior to Richard III’s ascent to the throne, the women struggle against the ties of blood, marriage and political circumstance, as they attempt to secure their position in the new monarchy. Written in rich and lyrical verse, Normand Chaurette gives voice to these often unheard characters, showing the humanity and frustration behind their crowns. It is an incredible journey into the dark and ever-shifting world of the queens. (glasswater.ca)