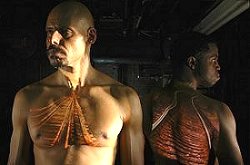 The Real McCoy is a powerful theatrical experience inspired by the life and times of Elijah McCoy. Born in Canada to runaway slaves, McCoy became a leading expert in the field of thermo-dynamics whose inventions revolutionized steam engine travel. When others tried to imitate his achievements, people began asking if what they were buying was ‘the real McCoy’. McCoy’s move to America exposed him to great adversity and eventually stripped him of his inventions, his sanity and his life.(factorytheatre.ca)