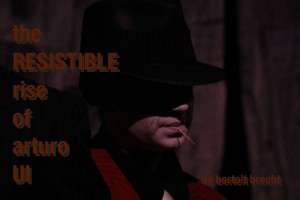 chicago in the 1930s. something is rotten in the cauliflower industry. a financial crisis and a corruption scandal allow the city’s most notorious gangster to use brute force and intimidation to manhandle his way to the top of the city’s vegetable racket, leaving behind him a trail of corpses.

brecht’s parable play about the rise of hitler and the people who elected him was written in exile in finland in 1941, in the early years of the second world war, with no end to the nazi terror in sight. fast paced, funny, and shakespearean in scope, ARTURO UI is about the politicians who play dirty and the people who let them. (theredlightdistrict.ca)