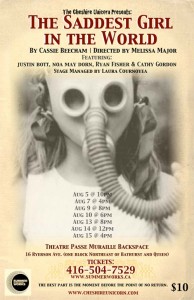 El [Noa May Dorn] fights depression with apathy. Her life is spiraling downhill… Her father is dead and living with Rita (her apocalypse-fearing mother) is turning more tumultuous by the hour. She doesn’t go to college, have a job, or really do a whole lot of anything. When Rita [Cathy Gordon] asks her to pay rent, El befriends Alex [Ryan Fisher] and Bently [Justin Bott] in the basement and then decides that sleeping with them is the best solution to earn her some cash. Her plans explode in her face and she is forced to decide to move on or give up completely. (cheshireunicorn.com)