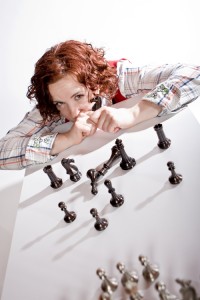 With its endearing cast of characters all played by carrot-topped Russian immigrant Elison Zasko, The Sputniks appears at first to be a simple comedy set among a Jewish family in the Soviet Union, but as this deceptive puzzle-box play unfolds, we’re shown the horrors of a totalitarian regime that drives the Sputnik family to plot a dangerous and ultimately soul-crushing course of escape to the West. Bound to homeless travel, they play chess, eat soup, and bravely carry their tragedies deep inside their suitcases. (tenfootpole.ca)