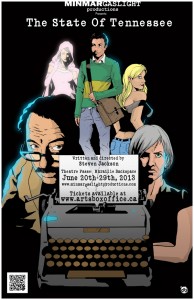 1983.  A young playwright travels to Key West, Florida, in an attempt to learn how to  write plays better from the greatest playwright of his time, Tennessee Williams.  It is the story of two men, Williams, far past his greatest works, struggling to write his next play while fearing for his mortality and the young playwright, forced to examine himself, why he writes and finally to see the world that is truly his own.  Facing the entrapments of their art, the weaknesses and faults that will set them back and the reality of their relationships, the two playwrights forge ahead and try to find what all writers seek:  Truth. (www.minmargaslightproductions.com)