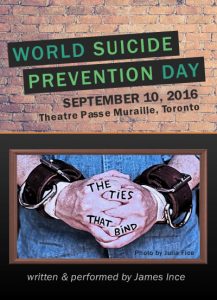 The Ties That Bind is a brutally dark comedy about society’s perception of mental illness. Sam Ward has spent most of his life trying to deal with the fact that he is not normal, which is normal to him. Plagued by peers, bosses and parents who cannot understand how he is feeling – but condemn him for it – Sam finds himself alone and broken. With humour and humanity to guide him, Sam tells a true story of surviving mental illness, rather than the stigma of suffering from it. Depression, loneliness, impossible self-imposed expectations, depression, the life-long effects of bullying, homophobia, work, depression, gut-wrenching disappointment, false friends, loneliness, depression. (asrlife.ca)