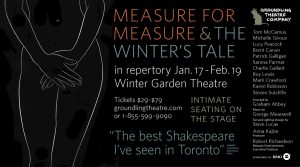 Written near the end of his career, and considered to be one of Shakespeare’s greatest masterpieces, The Winter’s Tale chronicles the descent of Leontes, King of Sicilia into a world of jealousy, murder and conspiracy when he falsely accuses his queen Hermione of an infidelity with his oldest friend Polixenes. Upon receiving news that his wife and young son have died under the strain of public humiliation, and believing his newborn daughter to be not his own, the vengeful King orders the child to be abandoned on the remote shores of Bohemia. When divine intervention plants the seeds of forgiveness and rebirth, the possibility of faith is reawakened. (groundlingtheatre.com)