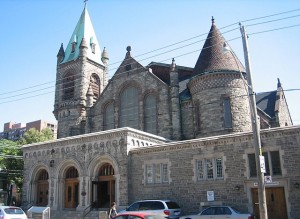 This church was known as Sherbourne Street Methodist when it opened for worship 5 June 1887. Designed by architects Langley and Burke it replaced a smaller house of worship built here in 1871. The handsome stonework and fine stained glass are of special note. Memorial windows bear the names of Sir Joseph Flavelle Sir Albert Kemp H. H. Fudger and Richard Brown who along with many other prominent Toronto businessmen were active members of the congregation. Their philanthropy and participation in social programs began a community-minded tradition that has continued through the years. In 1959 Sherbourne and Carlton United joined to form Saint Luke’s United Church. Toronto Historical Board 1987