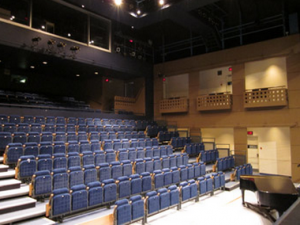 Located in the R.A. Laidlaw Centre, the Betty Oliphant Theatre (BOT) is a 265-seat proscenium arch theatre with a Georgian Court-style auditorium and a large fly tower. Tucked behind the façade of two Victorian mansions, it was designed by Jack Diamond, who is one of Canada’s premier architects. Acoustics were designed by Artec Consultants Inc.

Bearing the name of the school’s founder, the Betty Oliphant Theatre was originally built as a stage training facility to assist our students to make the transition from studio to stage. The stage enables students to become comfortable training without mirrors and performing on-stage.

The R. A. Laidlaw Centre contains the stage facilities, rehearsal studios, production offices, and a physiotherapy centre. The stage is used for classes six days a week, and was modeled after the performing space at the O’Keefe Centre (now the Sony Centre) that the National Ballet of Canada was using.

For the community, the theatre provides a professional setting and support system for dance and theatre productions. (nbs-enb.ca)