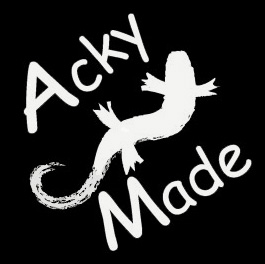 Acky-Made was founded in 2006 by Canadian composer/playwright/performer Alex Eddington. The company produces theatre works that seek out intersections of music, storytelling and drama. Dedicated to collaboration, Eddington has worked with three different directors (Alison Cousins, Laura Anne Harris and Tyler Seguin), all of whom he met as writer/performers on the Canadian Fringe Festival circuit.

Acky-Made has produced a roster of very different shows: two one-man plays – WOOL (2006) and The Fugue Code (2007) – and a piece for two actor-musicians: Old Growth (2008). All were written and performed by Alex Eddington and toured on the Fringe Festival circuit.  In 2009 and 2010, Acky-Made presented its first original production of an existing script: Tired Clichés by Canadian monologist TJ Dawe.

In summer 2013, the company is producing Yarn (a completely rewritten/re-conceived reboot of the stories from WOOL) on a cross-Canadian tour.
“Acky” is the name of Alex Eddington’s laptop, accordion, tenor ukulele, two previously-loved Volvos, and imaginary Leopard Gecko.