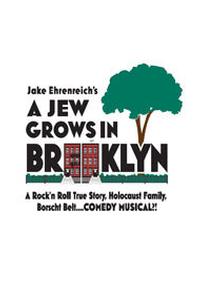 A JEW GROWS IN BROOKLYN tells Jake’s true story growing up in Brooklyn and his search for identity. As a boy, he wanted nothing more than to fit in. But the reality of being the first American-born child of Holocaust survivors with thick European accents made him do everything he could to conform to his vision of what it meant to be a “real” American. Still, no matter what he did and despite his expertise on the ball field, his extraordinary musical talent and his popularity, he always felt uncomfortable with his identity and with his family’s haunting past.
In poignant, touching and hilarious stories and songs – including a hard hitting classic rock medley from his youth, a multi instrumental version of Sing, Sing, Sing, a beautiful Christmas medley and a selection of Yiddish folk songs – along with the use of visual multi-media, Jake recreates his boyhood, adolescence and adulthood and his unforgettable journey of discovery and acceptance. From the front stoops of Brooklyn to the comedy and musical stages of the Catskills and Broadway, from the Rock n’ Roll road to the bedsides of ailing parents and siblings, Jake’s story is personal and universal at the same time. It is the story of all our journeys, no matter where we are from. (broadwayworld.com)