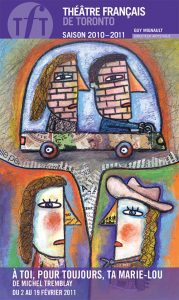 Marie-Lou and Léopold have been married for twenty years. They have two teenage daughters and a young son. They lead a very simple life, with low pay and little problems. But behind their numerous trivial worries stemming from a dull and monotonous daily life lurk more serious problems. Grudges, disappointments and hatred borne from their inability to communicate. All this leads to a tragic death, which is relived ten years later, through the eyes of their two daughters who, in familiar surroundings, settle the score with each other and their past, each in their own way. (Show Program)