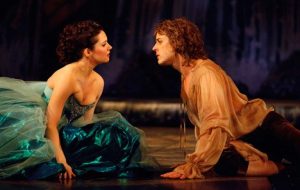 Based on Ovid’s tale of the water nymph Galatea and her doomed love for the Arcadian shepherd Acis, Acis and Galatea is one of Handel’s best loved works, and considered the pinnacle of 18th century pastoral theatre.  The opera weaves together a story of startling sensuality and humour blended with moments of heartrending poignancy – all told through some of Handel’s most sublime music for singing and dancing. (artandculturemaven.com)