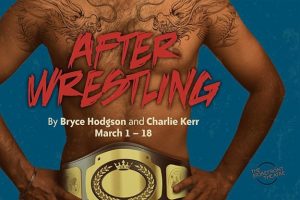 When your best friend kills himself and Facebook stalking your ex-girlfriend just ain’t what it used to be, look no further than rolling in duck feces and living in the park. Unfortunately for Hogan, his sister and the cops don’t share his same enthusiasm for DIY self-help.

After Wrestling is a slacker-comedy turned suicide-mystery that finds itself in a booze- and grief- fuelled magic realism debate on love, life, and after-death. (factorytheatre.ca)