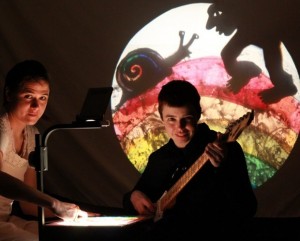 Mind of a Snail Puppet Co.

Gravity oppresses us all!

Mind of a Snail’s “Against Gravity” is a mind-bending journey through a world filled with surprises! It’s a shadow theatre performance that plays at the intersection of visual arts, clowning and live music. Unlike a traditional shadow puppet show, the two performers are both visible throughout the show – one projects colourful imagery using an overhead projector while the other creates a live soundtrack with guitar loops, beat-boxing and help from the audience. You’ll meet some anti-gravity protesters, an advice-giving snail and several near death experiences! The show is interactive & visually delicious, like a lucid dream. (summerworks.ca)