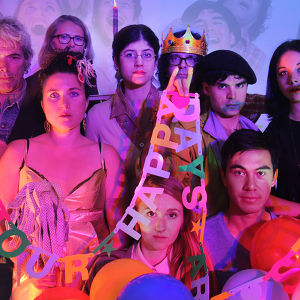 All Our Happy Days Are Stupid tells the story of two families on permanent vacation, searching for contentment and authenticity outside the confines of their flat-fronted black and-white existence. Sheila Heti’s eclectic play was called “unstageable” by the Toronto theatre company that commissioned it nearly a decade ago. It took the dogged curiosity of Jordan Tannahill and his Suburban Beast co-conspirator Erin Brubacher to put together a company of artists bold enough to reveal all its playful seriousness. Singing music penned by Dan Bejar (Destroyer, The New Pornographers), the exceptional cast of Toronto bright lights push Heti’s hyper-realism through realms of the absurd and back again to the unmistakably familiar. They arrive at what feels remarkably like wisdom. (harbourfrontcentre.com)