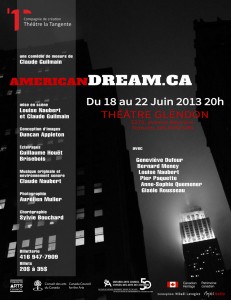 Americandream.ca is the story of three siblings, Alain, Maude and Claude Cardinal , three baby-boomers who have gathered to celebrate Alain’s 50th birthday along with his wife Pat, and Maude’s two adult children, Brigitte and Éric.

On the morning of his 50th birthday, Alain, a high level civil servant of twenty five years, walks into his office only to realize his position has been abolished due to government cut backs. While the security guards are escorting him out, he has a momentary break down and tries to throw himself through a window. The window doesn’t break, he merely bounces off and he is left in a heap, hurt and humiliated. Meanwhile his wife Pat, in therapy for the last twelve years, has finally had a breakthrough. She has come to the realization that she is unable to love her children. (www.theatrelatangente.ca)