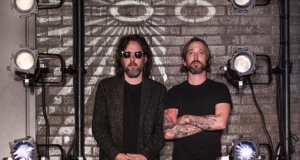 Straddling our world and the afterlife, Loud Angel and Soft Angel have been pulling people back from the brink with their music for decades. But times have changed. Their tunes just aren’t connecting like they used to, their numbers are down, and the universe is out of balance. Have they lost their touch? Or is something else going on? The A&R Angels have to write a hit or be eternally benched by the higher-ups: can they write that killer song that will give life to the living? (crowstheatre.com)