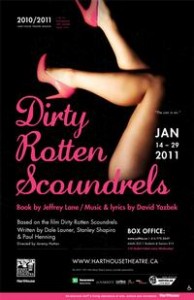 Based on the Film

Dirty Rotten Scoundrels is a hilarious musical romp based on the hit film starring Michael Caine and Steve Martin. On the French Riviera, two charming and unscrupulous con-artists are pitted against each other in this smart, sexy and side-splitting comedy. Filled with delightful scams, ridiculous plot-twists and plenty of back-stabbing fun. (harthousetheatre.ca)