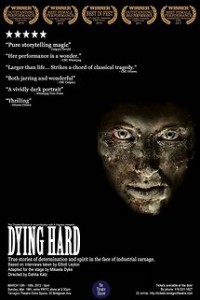 A Vagrant and The Theatre Elusive

Based on interviews taken by Elliott Leyton in St. Lawrence, Newfoundland.
Adapted for the stage by and featuring Mikaela Dyke

Six true stories from a community struggling to survive the ravages of industrial carnage. Taken from archived interviews, Dying Hard reveals the strength and grace of Newfoundland fluorspar miners in spite of the extraordinary hardships they faced.
(thetheatreelusive.com)