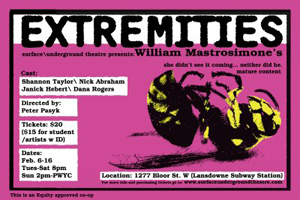 Mastrosimone tells an unforgettable story that is a gritty, raw, and unnervingly honest insight into the pathology of rape, the inequities of the justice system, and the unlikely relationship between victim and attacker. First produced in 1982, this internationally acclaimed and controversial play was the recipient of both the Outer Critics Circle and the John Gassner Awards. (surfaceunderground.com)