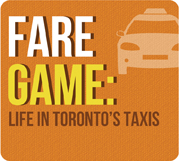 There is a crisis in the taxi industry and the city is faced with the monumental task of trying to solve the situation. Some of the drivers are organizing, but finding unity is a challenge in an isolated industry. Meanwhile, drivers are still struggling to make a living to support themselves and their families. The Toronto Taxi Collective have chosen a documentary style which combines theatre and film to explore the stores of the people who make up Toronto’s taxi industry and to plae their struggles in the spotlight. (Fare Game: Life in Toronto’s Taxis program)