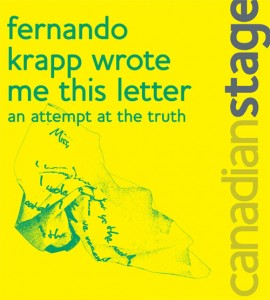 Fernando Krapp Wrote Me This Letter (2010)

When a mysterious millionaire writes her a letter calling her the most beautiful girl in the city and vowing to marry her, Julia is outraged. Though they are strangers, Fernando is determined that his betrothed love him and is undeterred by her protestations. They marry, but when accusations of infidelity arise, both Julia and Fernando have to parse through the facts in an attempt to separate reality and fantasy. This bold metaphysical fable is an investigation of the nature of love, power, desire and reality. (canadianstage.com)