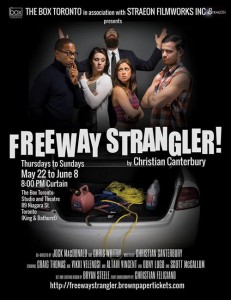 As a serial killer runs rampant in Los Angeles, four Hollywood actors, confusing desire for happiness, systematically love and destroy each other in their quest for success. One character will wind up dead, and another will be revealed as the Freeway Strangler! (Show Press Release)