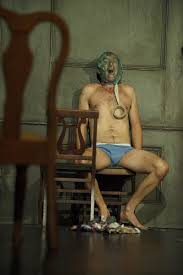 A radical re-visioning of one of the world’s greatest plays.

Toronto’s Necessary Angel partners with one of the UK’s most provocative theatre makers, director and designer Graham McLaren (Medea, Theatre Babel), to investigate a rigorously pared down Hamlet, combining the aesthetic of European theatre with the poetry of the British stage. A unique, immediate and violent 110-minute live theatre experiment seething with amorality where nothing is set and every performance is different. (harbourfronttheatre.com)