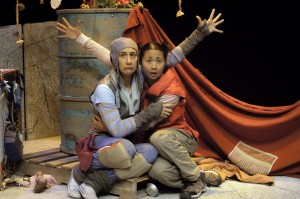 Head à Tête is a charming, insightful and often side-splittingly funny play that follows the story of two strangers who overcome the barriers of language and mistrust to find friendship.

Set in a barren, cold and windy land that was once a beautiful garden, Head à Tête unfolds with the arrival of a strange cage-like object. As if triggered by the presence of life, a magical tree bearing ”fruit” begins to grow. When two strangers, one French-speaking and one English-speaking, appear from opposite directions and discover the tree and the sanctuary it provides, a stand off begins. Frustration and conflict grows with each word spoken, but it is through the loss and re-birth of the tree that they find peace in each other’s company. (theatredirect.ca)